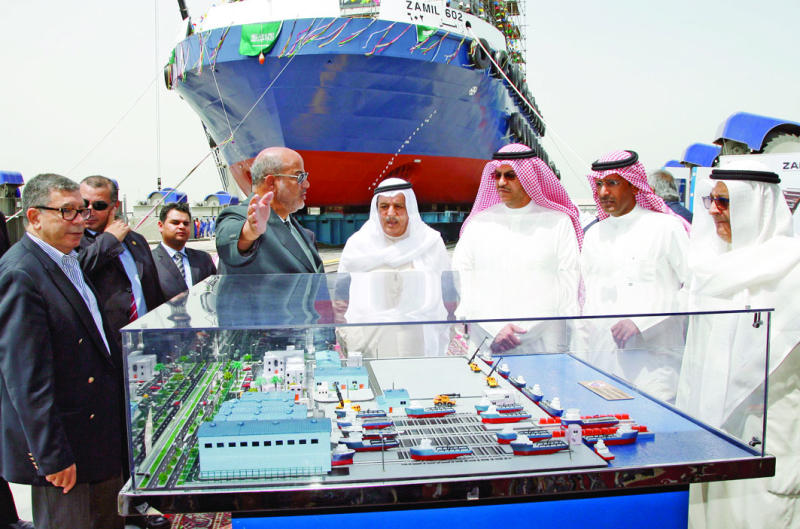 The Zamil 602 was manufactured at Zamil offshore services company at KAP in Dammam.

Among those present at the inauguration was KAP Director Naim Al-Nuaim and the Director of Kuwaiti Coast Guard at the Ministry of Interior, Brigadier Mubarak Al-Amiri, and other officials.

Speaking to Arab News, Alnaim stated that the vessel building industry has been active in the Kingdom for five years. A total of 47 vessels were made for Saudi Aramco, Saudi Ports Authority and others.

"This achievement was possible due to the joint cooperation between the private and public sectors, which resulted in the private sector getting a chance to contribute by operating and developing various facilities at the ports," said Al-Naim.

Sufyan Al Zamil, CEO of "Zamil Offshore Services", said in less than 40 days of launching the first vessel, we are now celebrating the launch of the second vessel of its kind.

He added: "We are in the final stage of constructing the world-class shipyard, which is expected to be completed by September 2014.

"The shipyard will service, build and repair vessels at King Abdulaziz port in Dammam."

The Zamil 602 features services, including diving and marine platforms. The length of the vessel is 62.10 meters and the width 18 meters, with a 4,130 horsepower engine.

Alzamil Company owns and operates a large fleet of 80 vessels serving offshore in the field of oil; however, it is considered the largest fleet in the Middle East specialized in oil industry.

Alzamil announced that the company was able to gain the confidence of Kuwait and signed a contract to build four vessels specialized in monitoring services in order to support the Kuwait border guards.

He said two vessels would be ready by June and the other two by November, both in 2015.

Alzamil stated that the future plans of the company will include creating a large shipyard for building and repairing vessels in Yanbu in order to provide services to ships and vessels in the Red Sea.

"It will also qualify for constructing and repairing naval and military vessels in cooperation with major international companies in the field," he added.